Who Plays Lucifer’s Daughter: Fans of Fox’s Lucifer and Marvel’s Deadpool movies will recognize Brianna Hildebrand as the voice of a major new character in season 6, Rory Morningstar, who will be played by Hildebrand in season 6.

Lucifer season 6 picks up a few weeks after the cliffhanger of season 5 when Lucifer Morningstar (Tom Ellis) was elevated to the position of God. In order to complete his ascension to the Almighty, the Devil is delaying his ascension, and his life is turned upside down when Rory Morningstar, the Devil’s daughter, arrives from the future with the intent of killing him.

Rory, on the other hand, grew up despising her father because Lucifer mysteriously vanished before she was even conceived. Rory, who is half-angel and has razor-sharp feathered wings that are black and red in color, self-actualized the ability to time travel and returned to Lucifer’s 2020 present in order to assassinate her father.

However, unlike Lucifer’s evil twin brother Michael, Rory did not engage in deceptive behavior and instead confronted her father. As both Lucifer and Chloe attempt to establish a relationship with their adult daughter from the future, the Devil’s primary focus in Lucifer season 6 are on uncovering the reason for his abandonment of his only child and disappearance.

”Yeah, that was a stressful experience for me. My meetings with [co-showrunner Joe Henderson] were numerous, as were my meetings with the directors, which was particularly important given that we were in the midst of COVID’s peak.

There were no vaccines available back then. Everyone was still extremely on edge. People are doing it now, as well, but it felt particularly intense at the time. Initially, we had to change the order in which the episodes were shot because of scheduling conflicts. So I figured I’d be able to ease my way into it by starting with Episode 1 and then moving on to Episodes 2 and 3. All of a sudden, we found ourselves in the middle of the season, and I was perplexed as to what was going on.

I’m under a lot of pressure. My fear is that I will not be able to do my job correctly because I do not know what I am doing. Everyone was extremely helpful, but the pressure was extremely high, especially because our rehearsals and other preparations were all kept under wraps until the day of the filming was completed. Because of this, getting myself into the right frame of mind was a significant challenge. But, more importantly, it was a fun challenge.” 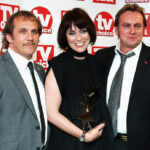